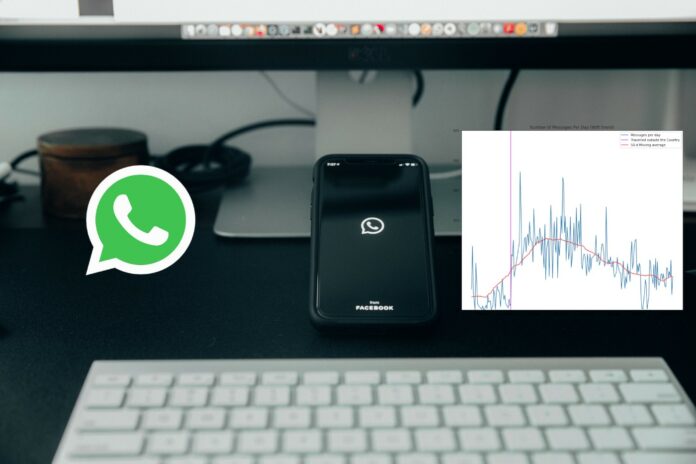 WhatsApp was officially launched in November 2009 as a chat app service for iOS. In August 2010, WhatsApp released an app for Android users. After that, it only took 4 years for the messenger app to hit a milestone of 200 million monthly active users. Thanks to WhatsApp’s growing popularity, Facebook acquired WhatsApp in 2014 for $19 billion, more than 12x higher than WhatsApp’s valuation from the previous year. Today, WhatsApp is reported to have more than 2 billion monthly active users globally. And is ranked among the most popular mobile messenger apps in the world.

Here are some of the key WhatsApp statistics of 2022-

In January 2021, the Global State of Digital named WhatsApp as the third most-used social platform with 2 billion users. It ranks behind Facebook (2.7 billion) and YouTube (2.2 billion).

Covid-19 led to an increase in WhatsApp users according to a survey of more than 25,000 consumers in 30 markets. To be more specific, WhatsApp saw a 40% increase in usage — higher than the initial bump of 27% in the earlier days of the pandemic.

Countries that were already in the later stages of the pandemic at the time of the survey reported a 51% jump in usage.

A Statista report mentions that 50% of WhatsApp users opened the app daily. 78% of users said they opened it weekly while 91% said that they used it monthly.

WhatsApp gains around 500 million new users every two years according to a VentureBeat post. This is based on the fact that WhatsApp only had 450 million users prior to its acquisition in 2014. It hit 1 billion users in 2016 and 1.5 billion users two years later.

WhatsApp Business’ user base grew tenfold from 2019. The business app claims to have more than 50 million users each month. That’s a big number especially considering that the app was only launched in 2018.

The users of WhatsApp Business are primarily small- to medium-sized establishments.

Of the 100 billion messages sent, 12 billion of those were pictures sent around the world.

Now that you know how big WhatsApp is, let’s take a closer look at who uses the app. Contrary to what you might think, WhatsApp seems to transcend age as it’s pretty much used by everyone regardless of age. The app is especially huge in countries like India and Brazil. That’s probably the reason why certain features are first tested in these countries before rolling them out everywhere.

In 2019 and 2020, WhatsApp ranked as the most important app for Brits according to an Audience Project study.

While it did not reach the top spot in the two years prior, it sat comfortably in second place just behind its parent company, Facebook.

The same study also mentions that WhatsApp ranks first for men (21%) and women (25%). WhatsApp is also the most important app for every age bracket except for the 15 to 25-year-old demographic where Instagram takes the top position (27%) followed by WhatsApp (19%).

Pew Research Center states in a report that at 46%, Hispanic Americans are more likely to say that they use WhatsApp. The African-American community and caucasian Americans are only at 23% and 16% respectively.

Reuters reports that Brazil is WhatsApp’s second-biggest market. The company has over 120 million users in the country which puts it just behind India.

This is the reason why Brazil got the first nationwide rollout of WhatsApp’s digital payment feature which allows users to send money to other users or local businesses within a chat.

WhatsApp is fantastic for users but what about businesses? Is it worth investing in the platform given the number of WhatsApp users?

The good news is that there’s a WhatsApp platform that directly targets businesses of all sizes. Also, the app had poured a lot into making it easier to shop through its chat feature.

Here are some facts to help you decide whether WhatsApp is worth considering for your business.

After purchasing WhatsApp for $22 billion in 2014, Facebook planned on monetizing the platform by selling ads on WhatsApp. But that’s no longer the case since Facebook backed down from the controversial plan.

There was a team that was supposed to find ways to integrate ads into the service but it has since been disbanded. All traces of ad integration were deleted from WhatsApp’s code.

If you’ve been meaning to connect with your customers, you can use WhatsApp Business, a stand-alone app designed for this very purpose.

It was initially launched to help entrepreneurs in countries such as the US, UK, Indonesia, Mexico, and Italy. WhatsApp Business was first launched for Android users and was available through the Google Play Store.

WhatsApp Business was different from the regular version in that it offered verified business profiles, smart messaging tools, and messaging metrics.

WhatsApp introduced a shopping button in late 2020 to streamline purchases and transactions within business chats. Users are now able to tap a button and find a company’s product listing without having to leave the app.

It’s a small feature update but has the potential to get people to move money within WhatsApp which, in turn, will help it become a key ecommerce provider in emerging markets.

Indian users can now use a feature called Payments Background. This allows users to add themed backgrounds to all monetary transactions made through the messaging app.

So if someone’s celebrating a birthday or you’re wishing someone safe travels, you can add a background that would highlight the occasion as you send the person money.

This feature was specifically built for users in India.

WhatsApp has changed a lot over the years. And its success can be attributed to all of the business decisions the company has made. It’s learned to pivot as new trends emerge.

In this section, let’s talk about everything the company has done to get to where it is today. We’re also looking at how the UK used WhatsApp during the pandemic.

While TikTok had a great showing on the App Store and Google Play Store in January 2021, WhatsApp placed fourth on both platforms — which is very respectable.

WhatsApp’s move was met with criticism. This caused the rate of new downloads to go down by as much as 30% for the month. Some of its users also jumped ship to Signal, a less popular competitor.

We know that Facebook now owns WhatsApp. But there was a time when Google was more than interested in acquiring the company. It was willing to buy the company for $10 billion.

Little is known at the time about what else came with the offer or why WhatsApp rejected the terms. However, it is worth noting that Google’s offer did not come with the promise of a board seat for Jan Koum, WhatsApp CEO and co-founder (Facebook’s offer did).

In an effort to capitalize on its success in certain regions, WhatsApp launched a digital payment service. The first stop was Brazil in 2020. The feature allowed users to send money to other users for free or make purchases from small businesses.

There were plans to eventually launch the same service in India, Mexico, and Indonesia.

You can look forward to seeing this feature rolled out should the testing show positive results.

WhatsApp enabled a feature that would make it easier for users to switch between mobile operating systems without losing their chat history.

Now users can move from iOS to Android (and vice versa) while keeping their voice notes, photos, and conversations securely intact.

Internet users who prefer using the web version of WhatsApp can now use its Drawing Feature. This will allow users to edit their photos before sending them to others. You can even add stickers, text, and drawings whereas before, you’d have to use a mobile device to do these things.

This is a good move since not a lot of people have access to third-party photo editing tools.

WhatsApp launched a feature that now deletes messages after seven days. Users can enable the feature through individual chats. For group admins, they’re able to turn it on in group chats.

The idea is to give users some peace of mind knowing that conversations are not permanent. The company figured seven days will be enough to still have access to important messages in case you need to.

This feature is a great addition especially for users who value their privacy above all else.

The UK government uses WhatsApp to combat misinformation about the coronavirus and making sure that people stay at home. The service functions as a chatbot where citizens can get answers to frequently asked questions.

People can find the latest information on coronavirus prevention, symptoms, travel advice, the data on the latest number of cases in the UK.

It’s worth pointing out, however, that this number includes pre-installed versions of the app. Some Samsung devices come with WhatsApp preinstalled.

Overall, WhatsApp is a great messaging tool with expanding features that are bound to change the way we do e-commerce. It’s definitely worth keeping an eye out for.