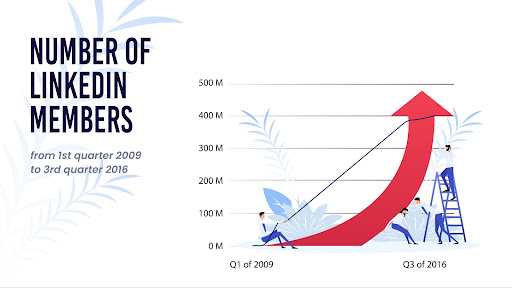 The network officially launched on May 5th, 2003, just nine months before Facebook launched at Harvard. LinkedIn is the oldest of the major social networks still in use today.
In this article, we’re going to share with you over 35 stats and facts that you can use as a guide for your LinkedIn marketing efforts in 2022.

1. LinkedIn has over 706 million members

LinkedIn boasts over 810 million users in more than 200 countries and territories worldwide (LinkedIn, 2022).

Although these figures seem considerably low compared to the likes of Instagram with over 2 billion users and Facebook at 2.91 billion users, the numbers are quite impressive, noting that LinkedIn targets a specific group of users ‒ the professional community.
Having been officially launched in 2003, LinkedIn has enjoyed a phenomenal gradual growth rate without experiencing any dips, as would be the case for other social media platforms like Twitter.
In just two years after its launch, LinkedIn had already amassed 1.6 million members and crossed the 100-million mark in Q1 2011 after going public.
The number of LinkedIn users more than tripled from 160 million to over 400 million members within the next five years, and just a year later, in 2017, the platform crossed its half-a-billion mark. Over the years, LinkedIn became the go-to network for all professionals globally, and not just in the United States alone. Out of the 810 million LinkedIn users, there are only 185+ million members from the U.S. (LinkedIn, 2022).

LinkedIn’s latest demographics stats indicate that the professional network is more popular among males than females. 57.2% of LinkedIn users are male, while females take up 42.8% of the total user number (Statista, 2022).
While the platform remains more popular among males, LinkedIn’s Gender Insight Report tells a different story regarding usage behaviours and engagement habits. According to the report, women are 16% more likely than men to get hired after applying for a job.

When broken further, the age group with the most number of LinkedIn users is between 25 and 34 years, taking up 59.1% of the total.

LinkedIn is a platform mainly built for working professionals and those looking to build their network. For this matter, it would make a lot of sense to notice a huge number of users from the ages of 25 to 35, as these are individuals looking to network and scout for better work opportunities.

The second most popular age group on LinkedIn ranges between 18 and 24, taking up 20.4% of the total. Most of the people in this age are in (or done with) college and would like to connect with other professionals whom they could use as mentors to grow their careers.

By the mere fact that LinkedIn is a platform for those working, scouting for newer professional opportunities, or looking to network, there are very few members (only 2.9% of the total) above 55.

LinkedIn is the most popular social media platform B2B marketers use for organic marketing purposes at 93% (Slideshare, 2022). One of the key reasons behind this success is the fact that LinkedIn is the most trusted social platform in the world, according to Business Insider. In its annual reports, LinkedIn has been shown to lead consistently as the most trusted social media platform amidst the surge of fake news.
In a study conducted by Hubspot, LinkedIn leads in terms of lead conversion rates. Traffic from the platform generates the highest visitor-to-lead conversion rate at 2.74%, which is 277% higher than Facebook and Twitter. This is an impressive figure, more so since 80% of B2B leads come from LinkedIn.
While it is quite popular among B2B content marketers, LinkedIn treks behind Facebook and Instagram as the most popular social media platform for marketers ‒ and for obvious reasons (Hootsuite, 2021).
With billions of users on both Instagram and Facebook, they are a marketer’s go-to place as you can easily reach many people in an instant. However, due to its trustworthiness rating and high lead conversion rates, LinkedIn follows closely, ahead of other platforms like Twitter and YouTube.

5. Every Minute 6 People Get Hired

According to LinkedIn’s own statistics, each week, 50 million people use the platform to search for jobs. And, their efforts aren’t in vain.

Every second, 95 job applications get submitted, while 6 people get hired every minute on LinkedIn.

Data revealed by LinkedIn reveals that in November 2021 some of the most popular industries for hiring were agriculture, construction, corporate services, finance, healthcare, manufacturing, transportation, logistics, and public administration.

6. India Is the Most Popular Hashtag

Twitter, TikTok, and Instagram aren’t the only social media platforms where hashtags can be used effectively. On LinkedIn, the hashtags with the most followers are: #India, #innovations, #management, #HumanResources, and #DigitalMarketing.

The hashtag India, for example, has nearly 68 million followers.

Other popular hashtags include: #technology, #creativity, #future, #entrepreneurship, and #careers.

7. It’s One of the Fastest Growing Brands Worldwide

To analyse your business growth in the most easy and fastest way, download Mezink now!